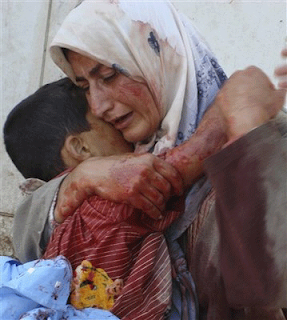 Cheney was here in Dallas recently, to vist with the people who he gave millions in tax cuts so that they could tip him, i.e. buy his book. I think he pissed he wasn't invited to the most recent Bush LibaryMemeoryHole event.
Yet there were no public events, he just hid in the mansion of one of our local millionaires, slinging mud like the cowardly evil clown he is:

“I can’t get over the fact that he doesn’t have that sense of exceptionalism about America,” Cheney, addressing guests in the mansion’s big backyard, said of Obama."

It's always nice that the Hero of the Iraq War, "Six Draft Deferments Big Dick Cheney" is still around to continue to soil his legacy of criminality, violence, and war crimes.
Cheney wrong about Iraq, WMDs, terrorist connections, tax cuts that won't increase the Deficit, taking advice from Enron, not getting Bin Laden.
It you would like to stroll down memory lane of Cheney's record of complete failure both professionally and ethically, here's a nice summary:
Dick Cheney’s criticism of Obama is both undignified and inaccurate. - Slate Magazine
Posted by GRUMPY DEMO at 4:14 PM