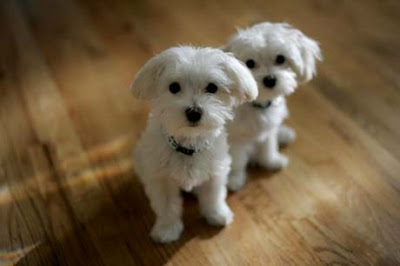 Today's Morning Edition has Juan Williams and guest host David Greene discuss Obama's press conference yesterday before getting to the FOX News talking points, they spent more time talking about where Obama was physically standing and the stage craft (did they ever do that to W?), than the substance of the press conference.

Well that answered the question if two Bush/Cheney era lap dogs lay down together, does any analysis happen?

Nope. Excuse me while Grumpy gets his rolled up newspaper.

David Green: NPR's White House lap dog under Bush, who never challenged Bush once despite: stealing an election, WMDs, Mission Accomplished, DOJ, Plame, and on and on. Green distinguished himself once by never distinguishing himself, because he didn't want to get kicked off of Air Force One.

Juan William:, the FOX alpha lap dog who distinguished himself by giving not one, but two of the most servile interviews of Bush ever ("The country is praying for you Mr. President") and most recently "embarrassing" (per cpb Ombudsman) NPR by defending Bill O'Reilly's hate speech directed at murdered Dr. Tiller .

These two Pomeranians sit down and recite the Beltway Press' latest dishonest talking points that the press has is going soft on Obama and now Obama's in trouble. Juan claims, falsely, that Obama has been dericise to the press, talk about a total lack of awarenss, Juan is the biggest fan of W, who's White House bragged about their contempt for him and his colleages.

If only Obama was like W, held fewer pressers, treated the press with contempt and ignored questions, that would be OK with these two pups.

(A shorter and more typo filled version was left at the NPR website.)
Posted by GRUMPY DEMO at 1:00 AM